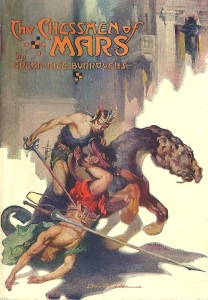 Again, John Carter himself is mercifully in the background. Again, the book concentrates on a couple. Tara is daughter of John Carter and Dejah Thoris. I’m intrigued as to where her name comes from. Given that her brother is called Carthoris, shouldn’t she be called Dejohn? Gahan, the jed (chief) of Gathol, loves her though she is engaged to another. (Sound familiar?) When she is lost while flying in a storm, Gahan sets out to rescue her.

This time, we go to two places nobody ever leaves: the land of the walking heads, the Kaldanes, and Manator, a city inhabited by primitive Red Martians. A Martian chess game called Jetan plays a pivotal role in the story, but frankly you don’t need to worry about the longish explanation of the rules in the early part of the book.

Tara does stuff though her role shrinks toward the end to someone to be rescued.  The Kaldane Ghek is my favorite character and there are plenty of twists and turns. I really enjoyed this book and for me it’s the best of the Barsoom novels I’ve read. 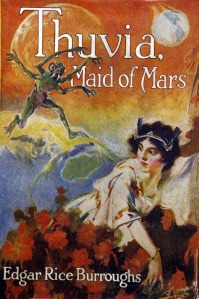 After the pummeling my nerves received from John Carter’s ego in Warlord of Mars, I approached this book with trepidation. Fortunately, I enjoyed it a lot more than the previous installment. Firstly, the focus isn’t on John Carter, but on the eponymous Thuvia of Ptarth and John Carter’s son, Carthoris. They come across as more rounded, likeable individuals. The villainous Drusar, learning from the mistakes of others, try something more subtle than kidnapping Dejah Thoris  and inviting John Carter to slaughter them. Thuvia, destined to be married to one of her father’s allies, is kidnapped and, in trying to help find her, Carthoris becomes the number one suspect for her disappearance.

Of course, yet again, there’s another region that nobody ever leaves: the ghostly city of Lothar. The inhabitants are an archetype I’ve come across in later novels, and their intriguing nature is never fully resolved.

While there’s a big war brewing, the focus is firmly focused on Thuvia and Carthoris. As soon as their story comes to a close, the novel comes to an abrupt stop. Even if you found A Princess of Mars a bit off-putting,  you might still enjoy this novel.

Okay. This one is a bit spoilery. So be warned.

The villains, Matai  Shang and Thurid, in this book have to be the stupidest so far. Have they learned nothing from the destruction their peoples suffered in the last book? Just give Dejah Thoris back to John Carter and he’d stop his hunt for you from pole to pole and go back to Helium and leave you alone. But no, that would be too easy.

Dejah Thoris again suffers from literary laryngitis for pretty much the entire story.

At this stage, the pattern is pretty set. John Carter arrives in some land nobody sensible ever goes to, makes friends with a local and sweeps away any evil tyrant who might be troubling his new acquaintance. At this stage John Carter has an ego the size of Green Martian’s egg and revels in every fight. I found it a bit wearing to listen to him.

The climax of the story is pretty good. However, to me, it seems a bit of an odd choice to install someone who delights in fighting as Warlord of Mars ‘to keep the peace.’

I found the  start of this book is actually more disorienting than its predecessor but it passes once a familiar face turns up. The book gives you the impression that the author wasn’t into organized religion, though that’s maybe reading too much into it. We discover that Mars is in fact layered like an onion with hidden races of cannibals and false religions. We encounter the white Therns and the black  First Born and their relationship to each other and the rest of Barsoom.

John Carter spends the novel either trying to escape one or other faction, or trying to rescue his princess from them. Dejah Thoris appears but hardly even speaks a word. Though John Carter only has eyes for her, nearly every woman he comes across falls for our hero. The exception is the villain Issus who is actually the strongest female character.

John Carter has a viking’s love of fighting and fortunately there is plenty of that. There are aerial battles aplenty. Whole armies are slaughtered.

If A Princess of Mars has a somewhat ambiguous ending, The Gods of Mars ends on quite a cliffhanger.

John Carter, a veteran of the American Civil War is prospecting for gold when he and his partner encounter Apaches. He escapes them by entering a sacred cave but immediately succumbs to a strange drowsiness. When he wakes up, he’s on Mars, a dying world known to the locals as Barsoom. There, he is a kind of a Superman in reverse, with super strength and super agility, able to leap a thoat (10 feet high green horse) in a single bound, etc. He encounters a tribe of fearsome six armed green humanoids led by Tars Tarkas. They capture a Red Martian princess, Dejah Thoris, whom John Carter spends much of the novel trying to protect.

Mars is a dying world where, surprisingly, the megafauna are the last to go. The Green Martians feel alien, the Red Martians less so. It’s a world where everyone is constantly at war but the survival of all life on the planet hinges on two guys running a single atmosphere plant. It’s morally uncomplicated world or rather John Carter sees it as such. All in all, it’s best enjoyed by following his example and adopting the attitude of when on Mars. The most important lesson from it is don’t mess with his princess!