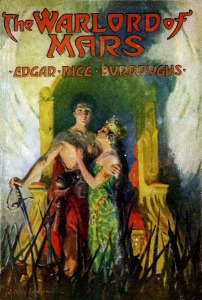 Okay. This one is a bit spoilery. So be warned.

The villains, Matai  Shang and Thurid, in this book have to be the stupidest so far. Have they learned nothing from the destruction their peoples suffered in the last book? Just give Dejah Thoris back to John Carter and he’d stop his hunt for you from pole to pole and go back to Helium and leave you alone. But no, that would be too easy.

Dejah Thoris again suffers from literary laryngitis for pretty much the entire story.

At this stage, the pattern is pretty set. John Carter arrives in some land nobody sensible ever goes to, makes friends with a local and sweeps away any evil tyrant who might be troubling his new acquaintance. At this stage John Carter has an ego the size of Green Martian’s egg and revels in every fight. I found it a bit wearing to listen to him.

The climax of the story is pretty good. However, to me, it seems a bit of an odd choice to install someone who delights in fighting as Warlord of Mars ‘to keep the peace.’