As I’m planning to launch Greater Evil on 28th February, I thought it worthwhile to do a bit of an introduction/refresher to sailed dragons used to travel across the vast distances of void between shards.

The crew of such dragons are known as drakers. Originally, they hailed from the fabled Aerhaunt Archipelago but they spread across the Crevast and mixed with other cultures, leading to most crews have diverse ancestories. They regard themselves as distinct from the peoples living on shards and refer to them as Landlubbers. They worship dragons rather than gods.

Though fiercely independent, they have built many powerful kingdoms in the past. They were unified briefly under the Emperor of the Crevast, but his empire fractured after his mysterious disappearance. Gyre and Ophigee are two successor states. During the Crevast Empire period, the peoples of the shards called them pyrates, a name that now only applies to those who engage in illegal activity.

The headstall is a structure under the dragon’s frill that extends in a band around the dragon’s head. A key part of it is the pineye, the compartment from where the captain commands. Generally, the pineye is easy to spot because of its large, hemispherical window. The whisperers are also based in the headstall. They are the drakers who communicate directly with the dragon by crawling into the dragon’s ears. They are treated with reverence by the rest of the crew and are paid in dragon wax.

Because the headstall is subject to the movement of the dragon’s head, navigation is managed in a compartment in the saddledeck’s quarterdeck called the whereabout. This contains an attracton, a ‘compass’ which is pulled toward different shards to varying degrees based on their relative positions. The whereabout also communicates with the headstall by means of signal lights. Commands are relayed to the cinchdeck by speaking tubes.

The dragon must bend back its head to facilitate boarding of the headstall from the saddledeck. The gap between them is bridged by the springboard. During flight, the headstall, saddledeck, and cinchdeck are physically isolated from each other so trust between the captain and his two senior officers is critical. 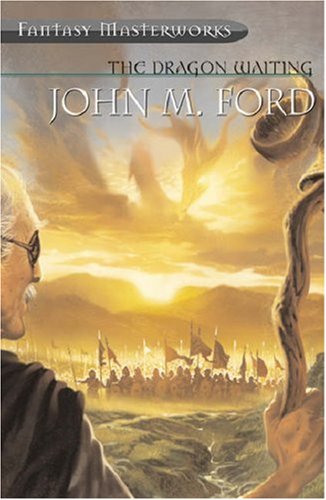 This book is set in an alternate 15th Century Europe where a pagan Byzantine Empire dominates Europe and Christianity is a minor religion. Except for a rump buffer state, France has been carved up between England and the Byzantines. The empire is infiltrating the Italian city states and is now plotting against their English allies. A magician and a small group of like-minded individuals travel to England to attempt to stymie its plan.

Initially the setting struck me as a bit strange in the sense that a lot of the big name political characters and institutions are the same as in our world. Surely, the failure of Christianity to dominate Europe would have a multiplicity of effects, great and small, that would alter history more radically. Then I remembered the vampires and put such thoughts aside.

Though short, this novel is challenging. It is very dense and sometimes deliberately opaque on characters’ motivations. Some sentences are knots of meaning, elusive or enigmatic. It’s up to the reader to decode it without the easy cipher of exposition. This made it difficult to bond at first with some of the characters and to sympathize with their aims. The Byzantine Empire may be the ultimate villain, but it spends most of the novel as a distant shadow. A big help in interpreting the text was the fan-made commentary Draco Concordans. (Thanks to the reviewer Niki on Goodreads whose review mentioned it.)

I struggled through the first half of the book. I struggled to care. But by the end, I loved it, won over by its rich detail, thriller pace, and memorable images. It’s not an easy read, but if you stick with it, it’s a rewarding one.