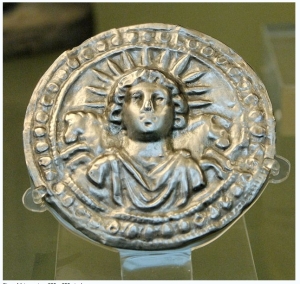 This image might remind you a little of the Statue of Liberty.  However, it is in fact a roman sun god by the name of Sol Invictus, sometimes translated as the Unconquered Sun.  His worship was popularlised in the third century by the emperor Aurelian.

At the time that Aurelian took over the Roman Empire, it was in decline due to civil wars and poor leadership. In the west, part had broken away to form the Gallic Empire, while several of the eastern provinces had become the Palmyrene Empire.  Barbarians were pouring what was left.  Things were looking pretty bad.

Aurelian reversed the decline, reunited the empire and dealt with the barbarian threat. He was a zealous reformer. He also encouraged all the people of the empire to follow one god, Sol Invictus, in a manner very similar to Constantine The Great’s later adoption of Christianity. Indeed, it is interesting that Sol Invictus is found on roman coinage until then.

We will never know what might have happened to the Roman Empire, if Aurelian had survived longer to consolidate popular devotion to his religion. He died violently as so many emperors before him. A strict disciplinarian, he engendered terrible fear among his subordinates. He even looks severe in many of his surviving images. In the end, it cost him his life. A secretary, fearing terrible punishment for a small lie, concocted a greater lie to save himself.  He convinced other officials that the emperor intended to have them executed, so they struck against Aurelian first, and the rest is, as they say, history.

Normally, I like to include a picture of the cover, but this book’s cover is not exactly inspiring – grey, and lined in blue like a copybook. It’s what is within the covers that makes it special. Ever read The Táin and was curious about its historical background? Cattle In Ancient Ireland examines the pivotal role that cattle raiding, and cattle in general, played in ancient Irish society, Cows were prized possessions, a measure of a man’s wealth. The book contains lots of fascinating details like mourning cows, cows in payment for poems, cow-blowing, cows in erics and fines, and the drawing of blood from living cows for food. Cattle raiding was such an accepted custom that new kings raided their people’s enemies to prove their worthiness.

The book appears to be out of print, but anyone who is interested in Celtic history, or history in general, would enjoy this book if they managed to find a copy.