January has arrived so it’s time to review 2016 and look forward to what’s coming up this year. Last year struck me as a very long year, probably the longest year of my life. Much was achieved. I published the second part of the Golden Rule Duology, The Unconquered Sun, last February. I also published two short stories, The Fate Healer and The Murder Seat. A third short story, No Escape, will be released on all platforms at some stage next week. (I can’t give an exact date due to the complexity of working through aggregators and so on.)

Of course, the published works are but the visible part of my writing endeavours. I wrote 1st drafts of four novels last year. My primary goal this year is to publish the first of these, codenamed somewhat ludicrously Spaghetti 1. Of course means it will have to reach a publishable standard. I should have the 2nd draft completed in the next three weeks.

The 2nd draft in many ways is harder than the first, because the blurry half-ideas that drifted in and out of the story on a sporadic stream of consciousness have to be sorted, graded, tossed aside where found to be utter rubbish, polished, and pinned to a cohesive structure. Of course, there are whole sections where the 2nd draft really is another 1st draft.

However, at this stage, I feel comfortable saying that the 2nd draft is a massive improvement on the 1st draft. It still needs a lot of work before it’s even ready for beta reading. I want to make it as good as I can before I submit it to the critical eyes of others. There’s no point ignoring your own intuition on plot holes only for these issues to become the focus of others’ critiques. I can’t remember any time where I doubted about a certain issue where that doubt wasn’t later proven to be justified. I want the beta readers to tell me I’m wrong in new and surprising ways!

Behold the winning cover my new short story, No Escape. It’s by Ivan Cakic (Cakamura Art Studio). For me, he really captured the essence of the story. The face of the main figure is particularly mesmeric.

I can’t wait to hit to the publish button in mid-January. It’ll be available on Amazon, iBooks, B&N, etc. Here’s the blurb.

A desperate warrior carries a baby girl across a foreign desert. Although truth and honor are tattooed on his cheeks, Tharo has abandoned both virtues in his quest to protect his charge. But it’s only a matter of time before he fails her. Another man stalks them, a hunter no prey can escape, the dreaded Souldiviner. 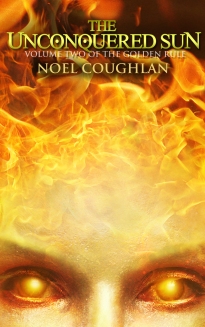 The Golden Rule novels and associated short story, The Parting Gift, are now available on Smashwords, Barnes & Noble, Kobo, iBooks, and other stores. The Parting Gift, which is a standalone set in the same world, will be free until further notice, so this is your chance to dip your toe in the water so to speak if you haven’t done so already.

I’ve written a post on Melanie Ansley’s website about five things that fatherhood has taught me about writing. You can check it out here.

I really must write these updates more often.

When I wrote the last one in June, I was working on the first part of a LitRPG trilogy, codenamed Spaghetti 1, 2, & 3. I now have first drafts of the first two completed and am currently half-way through the third.

The first book is kind of typical for LitRPG with some twists. The main character, starting off at the lowest skill level, must defeat a local (player) boss to win his freedom. The world is kind of like a typical fantasy MMORPG (for me). The focus is on the player interactions. The length of the first draft is about 49k words. It needs a lot of work, but hopefully, there’s enough in there to keep the reader interested.

Spaghetti 2 is a much different beast. It has a much more epic scope and the typical tropes kind of fall away a bit. Wait till you see the setting! Dante’s Inferno was a big influence on the story but I really let my imagination run riot. The action takes place in a locale we briefly visit in the first book. The main character is more advanced in this one but so are his surroundings. He’s up against much more powerful players with godlike powers. The first draft came in at 40k but it is absolutely packed with action. I don’t see any problem expanding it into full novel length.

Spaghetti 3 is an apocalyptic story. The end is nigh for the game world. At this stage, the main character is very advanced, the head of a powerful clan. A lot of seeds sown in the first and second books will reach fruition. This book will take a lot of work because given Book 2 is so epic, I have work out how to dial the third up to eleven.

I decided to write the three books to first draft so that I can see how all the various elements fit together. Although the three books have very different plots, I want to give them a cohesive tone.

Once the first draft of the third book is complete, I’ll be splitting my time between redrafting the books and writing new stuff. At times having so many ideas for projects is frustrating. If only I could get them all written and released. But I never publish anything without it being as good as I can make it.

On the short story front, I made The Fate Healer wide and free. I am in the process of doing the same with a new horror short story called The Murder Seat. I wrote it originally about three years ago. It’s set in recessionary Dublin in the 1980s. Hopefully, people will enjoy reading it as much as I enjoyed writing it. 🙂 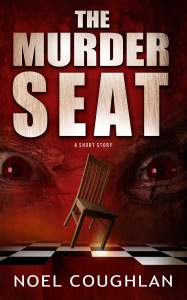 The winning cover was designed by Venanzio. It is awesome, but I must say it won against some stiff opposition. The facility to carry out polls is a really great feature on 99designs, because it allows you to test immediate reactions of people unfamiliar with the covers.

My intention is to make this story free out like The Fate Healer, so publication will be a little drawn out. I hope it will be free on all the usual stores by mid next week. Here’s the blurb to wet your appetite.

Dr. Herbert Marriott has a problem that only murder can solve. Luckily for him, the perfect weapon is locked away in his rundown museum, one too incredible for any court to accept. The cursed chair kills all who rest upon it. But will Herbert’s victim be so easily drawn to her fate?

A new short story is on its way. This one is a horror story. However, first I need to pick a cover. Follow the link below and vote based on your initial impression of which is most likely to make you buy.

UPDATE:  The poll is now closed and the winner will be revealed shortly!  Thanks to everyone who participated.

I’m running two promotions at the moment. I’ll list them in order of time sensitivity.

Firstly, the short story The Parting Gift is free on Amazon until 24th June. 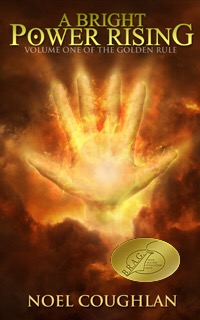 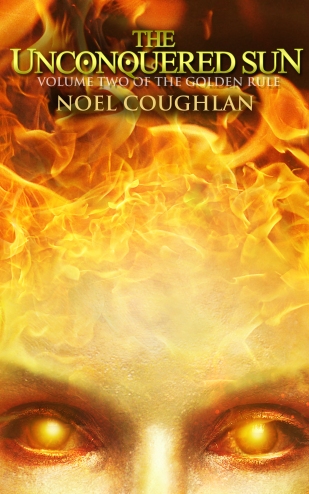 I am also running a Kindle Countdown (99 cent) deal until 28th June for A Bright Power Rising & The Unconquered Sun on the UK and US Amazon stores.

Ali Isaac is currently sending out a monthly newsletter on Irish mythology which will fascinate anyone interested in the subject. You can find her website and the sign on details here. 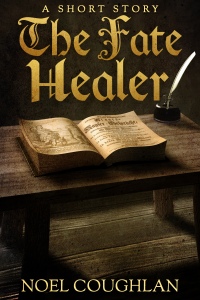 Just a quick note to let everyone know that my short story, The Fate Healer, is free this week until Friday 9th May.

A five thousand word short story where the quill proves to be more dangerous than any sword.

The genealogist Draston is charged with the impossible. His master, Hamvok the Merciful, craves a royal ancestor or two to legitimize his tyranny. But every avenue of Draston’s research comes to a dead end. Nobility has never sneezed on Hamvok’s ancestors, much less married into them. And now Draston’s time has run out.
To save himself from Hamvok’s violent displeasure, Draston promises to prove the tyrant is descended from a god. In doing so, he commits himself to a path of forgery and sacrilege. His enterprise will risk the wrath of gods. But, far worse, it will draw him to a shadowy figure more terrible than all the gods combined, the Fate Healer.

Photocosm – A World of Light
Blog at WordPress.com.